A New Way To Hunt

Crosman has been delivering some of the world’s best air-powered rifles since 1923. You probably grew up blasting soda cans off of your fence with one of their high-quality BB guns.

Now, they have something that can satisfy you as an adult, and it’s taking the archery world by storm. The Benjamin Pioneer airbow uses the Pioneer line’s famous pressurized air platform to fire arrows in a safer and faster way than traditional crossbows. How fast does an arrow arrow travel from a crossbow you ask?

We personally like the Pioneer because it’s safer, faster, and easier to use than a normal crossbow. We can’t begin to explain how much of a relief it is to not have to pull a heavy bowstring back before each shot.

The Pioneer airbow is a big game hunting tool, and it’s a safer alternative to traditional crossbows. The Pioneer is growing in popularity due to its speed, strength, and user-friendliness.

The Pioneer features a bullpup rifle design that makes it compact, easy to load in the most cramped conditions, and lightweight.

It’s capable of accepting many different optical accessories, but it comes with a specially-designed scope for long-range hunting.

What we really like about its design is that it doesn’t require you to purchase air cartridges like other air-powered weapons. It’s capable of being filled by a hand-pump in the field, and an electric compressor can fill it up at camp or back at home.

That makes it a great option for preppers or hunters that like to take prolonged trips.

Its unique design also provides a few safety benefits. Crosman claims that the bolt mechanism used for loading it is far safer than drawing a string with more than 100 pounds of pressure behind it, and we agree.

It’s easy to slip while cocking the string on a traditional crossbow, and that can lead to a lot of different injuries.

However, it also makes it a great option for people who are disabled or a bit too old to manhandle a traditional crossbow string. Since it’s air-powered, the Benjamin airbow doesn’t require you to exert any force. You simply put the arrow in, pull the bolt similarly to how you would for a rifle, and fire the bow.

The ease of use doesn’t just make it more enjoyable and safer for hunters in peak physical condition to use, but it also opens archery up to people who otherwise couldn’t participate in the sport. A wheelchair-bound man with limited arm strength could easily fire the Benjamin Pioneer airbow.

How Does The Airbow Differ From A Conventional Crossbow?

There are several differences between the Pioneer and a traditional crossbow. In fact, the only real similarity is that they both shoot arrows.

Before we get into the differences, here are the specifications for the Benjamin Pioneer airbow:

The Pioneer uses a chamber of pressurized air to fire its arrows. The pressurized air can not only fire crossbow bolts with more force than a traditional crossbow, but it can fire arrows more accurately and at a faster rate.

A traditional crossbow can fire arrows at about 150-175 FPS with most top-end crossbows being able to fire around 350-400 FPS. Some can hit 200 FPS, but those tend to be pretty clunky, and they’re not safe for people with limited strength to use.

The Pioneer can fire arrows at 450 FPS, and it can do it much more consistently than a normal crossbow because its air chamber has a built-in regulator. 450 FPS is more than enough power to kill just about anything that isn’t plated in solid steel, and there isn’t a traditional crossbow around that can compete with that much power.

Read our reviews on the fastest crossbows on the market.

You can use the same arrows you use for your bow or crossbow, but the Pioneer comes with three custom-crafted arrows, and they’re tipped with hunting heads. You can also buy more from Crosman’s website.

The custom-crafted arrows will fly straighter and farther than a lot of the other arrows on the market, and their field tips can easily penetrate flesh.

However, a normal crossbow can also shoot the Pioneer’s custom arrows. So, it’s not much of a pro for the Pioneer. It’s just nice that the Pioneer comes with three of them.

A lot of variables can affect a traditional crossbow’s accuracy. Since they’re powered by a string, anything short of a perfectly strung crossbow can lead to very inaccurate shots. Also, due to vibrations in the string and other drawbacks of a crossbow’s design, it’s difficult to get a tight grouping consistently with a crossbow.

The air-powered shot of the Pioneer is much more consistent. It fires a lot like an air rifle. Pressurized air shoves the arrow out of a narrow barrel, and that forces the arrow to follow a more precise trajectory. How far can a crossbow shoot accurately? It’s a lot more accurate than a normal crossbow.

The rifle-like design of the Pioneer airbow allowed Crosman to put a Picatinny rail system on the top of it. Some crossbows have these rail systems, but their design prevents the system from being implemented very well.

The Picatinny rail system allows for multiple types of optics to be mounted on the Pioneer, and it allows for the default 6×40 scope to sit comfortably on top of the bow.

You really can’t debate that the Pioneer is far safer to use than a crossbow. You don’t have to pull on extremely tense strings to cock it, and you don’t have to worry about a bad string snapping in a dangerous fashion.

All you have to do is cock a small lever to load your arrow, and it takes almost no effort to do that. This makes it easier for the bow to be used in a compact environment such as a tree stand or a pile of bushes.

Struggling with strings can leave you open to a few types of injuries, and that makes it unsafe for people who lack physical strength to operate a traditional crossbow. That’s not a problem with the Pioneer.

The Pioneer fires arrows just like any other bow weapon, but the custom arrows it comes with a little different than traditional arrows. They don’t have notches in the back. They’re just not made to be used with a string and are different from arrows for a compound bow.

They also have some fancy proprietary design choices included, but those don’t really separate them from other arrows too much. They just increase their performance a bit.

Like other bows, you can load it with one arrow at a time. It loads via a tube located at the back of the bow, and a cocking bolt is used to fully load it. Once it’s loaded, the air reservoir will blast it out at 450-FPS.

The compressed air is a bit more unique. The built-in reservoir can hold enough compressed air to fire eight shots before it has to be refilled, and there are a few ways to refill it.

A pressurized air tank can be used in the field, but it’s a bit heavy for a hunting pack, and we recommend using that during your pre-trip preparation.

In the field, we recommend using a simple pump. The pump that Crosman provides resembles an old bicycle pump with a tactical paint job, and it can pump 3000-PSI into the Pioneer with ease. It’s lighter than an air tank, and it doesn’t require any gear to refill it. So, it’s the more reliable option. It does require you to burn a few calories to use it, though.

One of the things we love the most about the Pioneer is that it’s easy for anyone to use. It’s not like other bows that require a lot of upper body strength to properly use.

It’s a sad fact that most people confined to wheelchairs or affected by other disabilities simply couldn’t get into archery with traditional bow designs. However, that’s not a problem anymore.

The Pioneer’s loading mechanism makes it accessible to people with extremely limited hand movement, and it doesn’t require any standing or core movement, either. If you can gently slide an arrow into a rear-mounted tube, you can load the Pioneer.

Once you push the arrow into the bow, all you have to do is pull a bolt to cock it. That’s a lot easier to do than pulling a tense string all the way onto a lock, lining up an arrow, and then firing a heavy crossbow.

Most of the states allow anyone to use the Pioneer during bow season, but a few of them only allow it to be used by people with disabilities that limit their ability to use a traditional bow.

Crosman’s website has a handy map that shows you what you can hunt with the bow in different states. However, they’re not law experts and neither are we. So, you should still check with your local wildlife authorities to make sure it’s okay for you to hunt with the Pioneer in your area.

You should also consider petitioning your local government to allow hunters to use the Pioneer if it’s currently illegal. The Pioneer is safer than traditional bows, and it allows people with physical limitations to enjoy hunting just like everyone else.

The Benjamin airbow isn’t just a cool novelty. It’s a step in the right direction for the archery world. It has made the sport safer, more enjoyable, and more accessible than ever.

If you’ve been looking for a way to enhance your archery experience, the Pioneer is the best way to go about it. 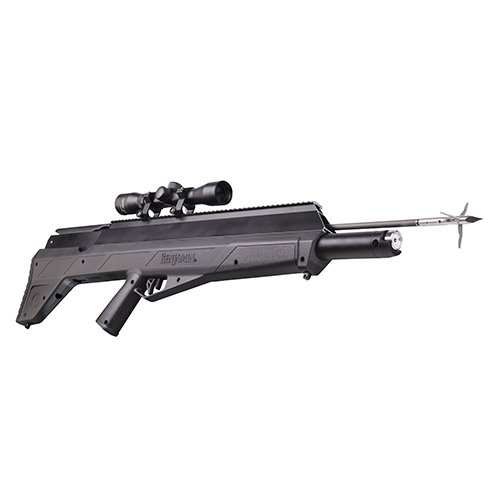 42 Survival Gear List Ideas : What To Pack And Why

Car Survival Kit : For That On The Go Emergency